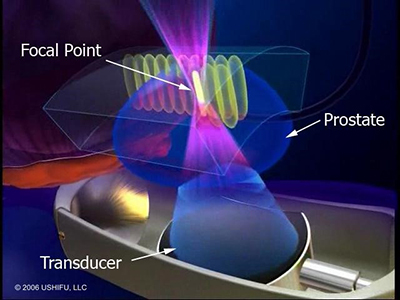 HIFU stands for high-intensity focused ultrasound, which is a minimally invasive technique for treating diseased tissue with precise, focused ultrasound waves that raise the temperature of the target to nearly 90 degrees Celsius (190 degrees Fahrenheit) in two to three seconds. This rapid-firing heat effectively destroys the targeted tissue but leaves the surrounding healthy tissue intact.

What is HIFU with the Sonablate® 500? 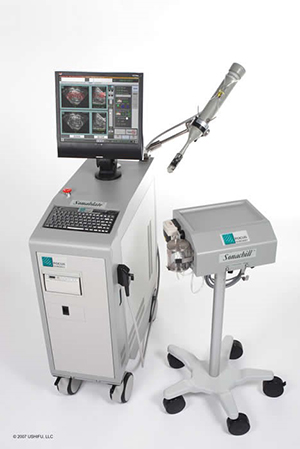 The Sonablate directs intersecting, precision-focused ultrasound waves at the diseased tissue only and leaves healthy cells surrounding the prostate untouched. HIFU uses non-ionizing, or clean, energy so the procedure may be repeated if necessary without damaging other tissue, unlike radiation-based therapies.

What are the results of the Sonablate HIFU treatment?

One international study published by Toyaki Uchida, MD out of Japan showed that after four years, 94 percent of patients (low-risk) were disease-free. Additionally, a study from Mark Emberton, MD in England reported that 92 percent of men treated with HIFU had a PSA of .2ng/ML or lower three months after HIFU. The Sonablate is currently in the clinical trial phase in the U.S.

What are the recovery times and side effects of Sonablate HIFU for prostate cancer?

Patients can typically return to their normal lifestyle within a few days after the 1-4hour procedure. Recovery involves wearing a catheter for 2-3 weeks. Some HIFU patients experience urination frequency or urgency or mild discomfort or discharge in the urinary stream. Studies performed outside the U.S. report that potential side effects may also include urinary stricture (18%)2, retention (0.6%)1, incontinence (0.6%)1, erectile dysfunction (20%)1 and rectal fistula (1%)1.

Does HIFU treat only cancer cells? How?

What is the history of HIFU and how long has it been used?

Research on HIFU began in the 1950s at Indiana University (IU) in Indianapolis, IN. In 1994, Dr. Michael Marberger and Dr. Stephan Madersbacher performed the first human prostate cancer study at the University of Vienna in Austria using the Sonablate 200. They treated 29 human prostates in the body before performing a radical prostatectomy in order to see if the energy delivered was enough to destroy the targeted tissue. The study found that treatment could be performed safely and be repeated if necessary.

Other significant dates and milestones include:

Where is Sonablate HIFU available now?

The device is currently available for the treatment of prostate cancer in Europe, Canada, part of Asia, South America, India, and the Caribbean. Currently, there are nearly 100 Sonablate HIFU centers worldwide on seven continents. There are over 150 physicians using the Sonablate 500 worldwide and more than 7,000 Sonablate procedures have been completed.