What is Peyronie's disease? 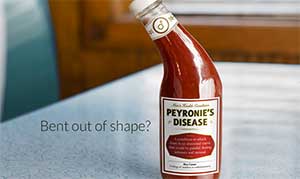 Peyronies disease is a urological condition in which fibrous plaques or scars form in the penile erectile body known as the tunica albuginea.  These plaques are palpable underneath the skin and can result in bending or curvature during erections.  The plaques can often be painful to the patient.  The penis consists of three distinct structures.  The urethra is on the ventral or bottom of the penis and serves the function of carrying urine away from the bladder during voluntary voiding.  On top of the urethra, on the dorsal side of the penis, there are two identical corporal bodies that lie side by side.  These corporal bodies are spongy, blood vessel-filled cavities lined by a tough, fibrous capsule called the tunica albuginea.  When the corporal bodies fill with blood during sexual stimulation, the penis becomes rigid permitting penetration during intercourse.

What are the signs and symptoms of Peyronie's disease?

Peyronie's disease occurs on the top or dorsal surface of the penis 70% of the time.  Plaques or scars within the tunica albuginea or capsule of the penis result in contraction of the tissue and therefore bending or curvature with erections.  Some men may report a narrowing of the penis in the location of the plaque or even shortening of the erect penis.  Other signs and symptoms associated with Peyronie's disease including bending or curvature with erections, a hard mass or lump under the skin, pain associated with erections, erectile dysfunction, and difficulty with penetration because of significant penile curvature. 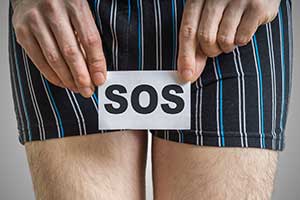 Peyronie's disease is not a sexually transmitted condition or an infection.  The cause of Peyronie's is thought to be from trauma to the fibrous capsule of the penis (tunica albuginea) that occurs during vigorous sexual intercourse and results in scarring of that traumatized segment.  On more rare occasions it may result from sports or other traumatic accidents.  Certain environmental and genetic components are associated with Peyronie's disease most notably Dupuytren's contractures or tympanosclerosis.

What are the stages of Peyronie's Disease?

In the Acute Phase of Peyronie's the plaques are beginning to form as a result of trauma.  This phase is suspected to last from 6 to 18 months and can be associated with worsening bending or curvature as well as pain with erections.

In the Chronic Phase, the plaques or scars are already well-formed.  The curvature can remain stable or even improve slightly.  Pain has resolved.

How does my physician diagnose Peyronie's disease?

Peyronies disease is diagnosed principally based on history and physical exam.  A patient with complaints of bending or curvature with erections or penile shortening associated with a palpable plaque has Peyronie's disease.  Lab tests and/or biopsies are not necessary to make the diagnosis.  On occasion, a penile doppler ultrasound is used to document penile blood flow, especially when Peyronie's is associated with erectile dysfunction.  Ultrasound can also assist in locating and documenting how extensive the plaque may be.  During a penile doppler ultrasound, an erection can be induced with an erectogenic injection and the degree of curvature can be measured.  This is important when considering treatment options.  For example, Xiaflex injections are only indicated when Peyronie's is associated with a palpable plaque and a measured curvature greater than 30 degrees.

What are the treatment options available for Peyronie's disease? 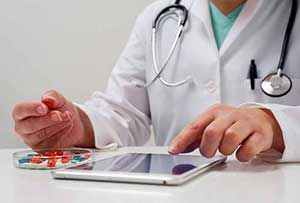 In some men, Peyronie's disease is mild and may resolve on its own without treatment.  Others may have some permanent curvature but not enough that it is bothersome to them or their partner and no treatment is needed.  Many men do have significant bother and seek treatment for curvature causing embarrassment or inability to penetrate, pain, erectile dysfunction, and/or penile shortening.  For patients who seek treatment there are options:

Although many studies have been done testing oral supplements and medications such as Vitamin E, Potaba (Potassium amino-benzoate), Tamoxifen, Colchicine, and Carnitine none have shown any significant benefit in randomized controlled trials and the use of these agents cannot be supported with scientific data.

Similar to oral therapies, many medications and supplements have been studied for injection directly into the Peyronie's plaque most notably Verapamil and Interferon.  Although some of the studies do show mild benefit with these agents, larger studies are needed to show statistical significance and benefits are mild at best. 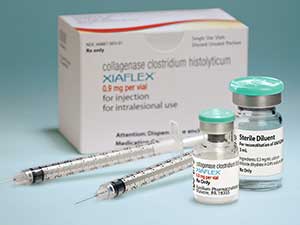 Xiaflex is the only FDA-approved non-surgical treatment option approved for men suffering from Peyronie's disease.  Xiaflex is a potent collagenase enzyme that when injected into the Peyronie's plaque works by dissolving the plaque.  Xiaflex is given in cycles of every month or so until results are seen.  Cycles of Xiaflex for Peyronies consist of 2 injections a few days apart. Xiaflex must be combined with modeling and bending exercises performed by the patient to achieve optimal results.  At Urological Consultants of Florida, we have extensive experience treating our Peyronie patients with Xiaflex.  Although significant improvement can be seen with Xiaflex, side effects and complications can occur.  Bruising and swelling are common after injections.  Penile injury including corporal rupture or fracture can occur if vigorous sexual activity if performed within a short period of time after Xiaflex injections.  Xiaflex injections are only indicated for patients with a palpable plaque and an erect penile curvature greater than 30 degrees.

Surgery for the treatment of Peyronie's should only be considered as a last resort when other methods have failed.  Surgical options for Peyronie's include: 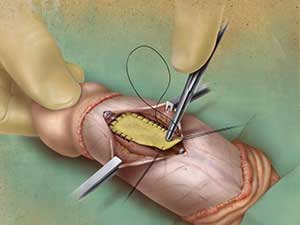 Both autologous (self) grafts and non-autologous (non-self) grafts are employed in Peyronies treatment.  These grafts or patches are used to replace segments of plaque and straighten the penis.  Drawbacks to the use of grafts are that they require open surgery and may result in erectile dysfunction or even a more significant deformity in the penis.

Penile implants or penile prosthesis placement is an excellent option for men with a significant Peyronie's deformity and associated erectile dysfunction. In these patients, injecting the plaque with Xiaflex or repairing the plaque with a patch may leave the patients with a straight penis, but they would not have the ability to engage in sexual intercourse given their baseline erectile dysfunction. A penile implant will both straighten out the Peyronie's plaque and allow the patient to have a reliable erection.

At Urological Consults of Florida in North Miami, our board-certified urologists specialize in the treatment of Peyronie's disease and the current treatment options including Xiaflex injections, penile implants, and grafting.